6 Common Mistakes People Make When They Come to Los Angeles

1. Bringing too many jackets

In virtually everywhere else in the world (save maybe Hawaii or Florida or other tropical locations), jackets are an absolute necessity. In Los Angeles, however, jackets really aren't needed--well, at least multiple. People who move to LA often waste valuable closet space on tons of jackets and other outerwear only to wear their one favorite Patagonia or North Face. Visitors and tourists would be better off packing one jacket in their suitcase and leaving the rest at home. Simply put, it doesn't get cold enough often enough here in La La Land to warrant multiple heavy-duty jackets.

People have all kinds of excuses to not wear sunscreen, and not all of them are all that unreasonable. Among them is that it takes time, that sunscreen feels too greasy, that they don't burn anyways so what difference does it make? However, the LA sun, especially during the summer, can be intense especially with the usual lack of cloud cover. It's really no fun to be all burnt and peeling, so it's best to just grab a simple sunscreen and apply it to where you can. Tan is the plan, burnt is not turnt.

If you've ever heard that UPS only makes right turns, then maybe consider that left turns at stoplights in LA are a part of that time-saving decision. Not to say you should do what UPS does, but it is true that newbies to LA are intimidated by the left turns at stoplights. Why? Well, they're largely unprotected. What does that mean? It means that when you are making a left turn, you must yield to the opposite direction's cars driving straight through. When the coast is clear after they have passed, THEN you can make your left turn. It's slightly scary since you have to meander in the middle of the intersection and you have to turn before the light turns red (lest you block other cars or even get hit). For first-timers, the timing of this operation is tricky and scary, but you quickly get used to it.

5. Not having an umbrella 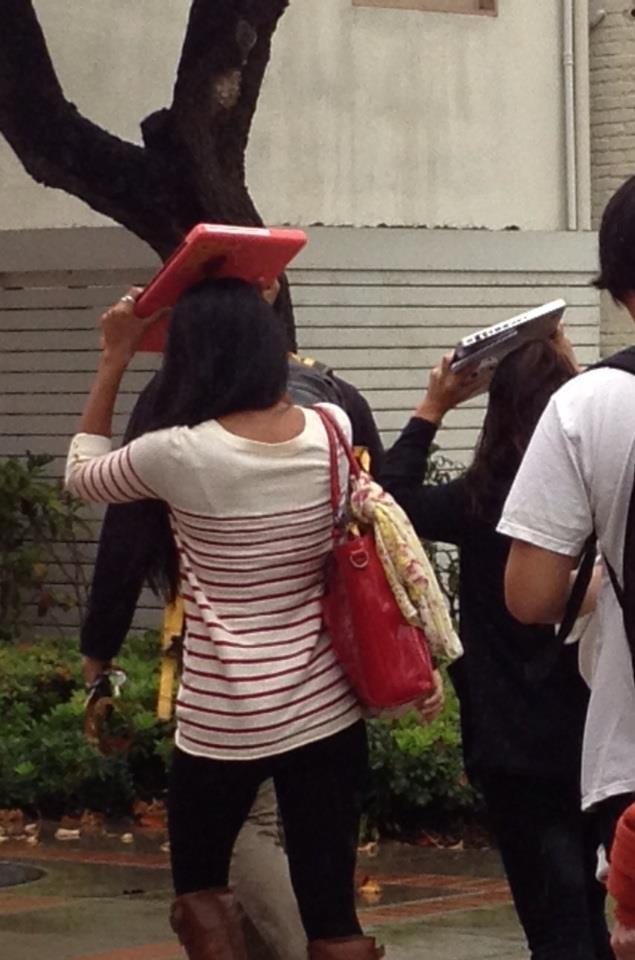 Apparently, this photo was taken at USC.

LA is definitely warm and definitely lacks rain compared to most of the United States (and a lot of the world), but that doesn't mean it never gets wet. Too many people have been caught without an umbrella when a rainy day comes along, leaving them soaked and embarrassed. It's a good idea to always still check the weather and be prepared for whatever forecast comes along.

6. Saying NorCal is better than SoCal

You wanna be hated in Los Angeles? You want people to get more upset even than when you disagree on politics? Then don't ever, ever make this cardinal mistake. It doesn't matter if you think you're right--and maybe there is no right answer here--but it's just a recipe for disaster.